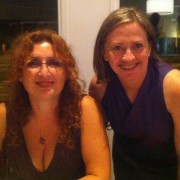 There’s a discussion over at The Book Bosses Facebook page regarding editing in self-published novels and a question:

Do you give a self-pub book with many typos and grammatical errors a lower rating?

It’s a very good question. They do have good discussions on that page. What do you think? The overwhelming response was: ‘Yes.’ There were two issues covered.

I’m probably one of those who prompted this conversation. I own my mistakes. Not happily. I know for a fact I had typos in my first book, Seldom Come By. I had 2016 when I meant 1916. I stumbled over haemorrhage. I had one too many ‘c’s in Rebeccca. Jon, a retired neurologist, wrote and explained the difference between chord and cord. And after I read his note, I slapped my forehead and said, ‘of course, I knew that but I forgot.’ The spellchecker never picked that one up. My 16 beta readers, yes 16 over three different versions, and my manuscript assessor, personally recommended by the managing director of Harper Collins Australia, did not pick this one up. It just goes to show.

These have all (fingers crossed) been fixed. That is one of the beauties of eBooks and print on demand. You can edit a file, upload a new version and then when people connect to their devices they are automatically sent the latest version. With a print book, from that point onwards, the latest version is the most correct version. But I know it doesn’t help at the time if there are mistakes in your version.

I know how frustrating this can be for readers because I am one too.

When it comes to writing and publishing I can’t talk for other indie authors, I can only share my own experience. Actually, that’s not correct, my friend Jennifer Collin, paid for a professional editor for her first novel Set Me Free, and after she published it, she was told it had mistakes. She was not happy 🙁  Jen, take heart, there weren’t that many. 🙂

I had three people plus myself proof the final version of Come What May, none of them professional editors, but people who are solid readers and have a good command of the English language, two of whom do a fair bit of writing in their day jobs. During those frantic 10 days I spent uploading what I thought was the final version to Amazon, Smashwords and CreateSpace (final files uploaded on 9 September) I was still finding tiny errors, odd spacing that I had missed. Oh the flagellation that goes on. The human eye, aided by glasses, can only take so much.

Over the years what I’ve learned through my corporate work and this publishing journey is that one person alone, no matter how good they are, can’t spot all the errors. Neither can many. Errors often are found once a document or book has been published; found by readers, who for some reason notice something no one else ever has till then. This is true. Keep reading to find out about my exchange with Paullina Simons.

So I think even with paying for a professional editor, mistakes can slip through. I investigated professional editing options for Come What May. To pay for an editor, the lowest quote I received was $2000. For me to recoup that at say 60% / $3 an eBook would require me selling close to 700 books. I still haven’t sold 700 copies of Seldom Come By. I can only wish. That decision was weighed up along with:

Many people know one of my favourite books ever is The Bridge to Holy Cross, called Tatiana and Alexander in some parts of the world. I first read it in September 2004 when I was ill and home alone in New Zealand while my partner was half a world away in the United Kingdom. Then in March 2006 I picked it up to read again on my birthday as a special indulgence and you’ll never guess what I found in the opening paragraph.

Have a read yourself and see if you notice anything. Here’s the link to the book on Amazon so you can see inside the current version. Better still; to save you the trouble I’ve pasted it below. 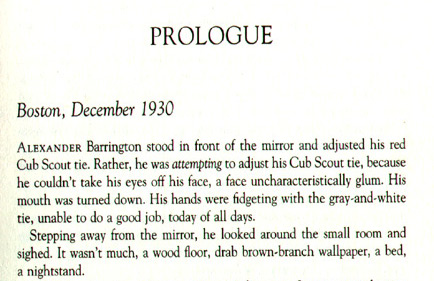 Did anything stand out in that opening paragraph? Well in case you missed it, here’s my letter that I sent to Paullina:

Greetings from New Zealand. I hope Spring is coming early to you in New York.  I’ve just been re-reading Tatiana & Alexander and for the first time ever I noticed something unusual in the first para and thought I would drop you a line about it. Maybe it’s something I’m not getting…however in the first line Alexander’s tie is described as red and then four lines down it is described as gray-and-white. Just thought you would like to know this in the event that it’s not what you intended.

I hope the writing on your next novel is going well 🙂

And here’s her reply, sent on my birthday, such a wonderful birthday treat!

I mean, the book has been read and revised and edited not just by me, but by my husband, and my two editors, and by two copy editors, and by four proofreaders. The last time was just this summer when I was getting it ready for the American publication. Just goes to show you, doesn’t it, how things skip by, and this is the very first time I’m hearing of it. Oh, well, never you mind. Oops. 😀

More important, I want to thank you for your lovely card, sent last Christmas, that I just picked up this week from my post office box. It was very lovely of you to write me such kind and generous words that made my heart gladder.

Perhaps when I’m in New Zealand next, you can come to one of my little shindigs and I can shake your hand.

With my best wishes,

I was reading the original version published in 2003. But the US version that came out in 2005 had 8 paid professionals working on this book – imagine the cost of that – and they all missed it too, along with Paullina and her husband. Incidentally, you’ll note it hasn’t been fixed. Because there are more important things to worry about! There are new books to write, which millions of fans want right NOW!

So my takeouts are:

Do readers deserve a perfect book? Yes, they do. I will continually strive for perfection. Hopefully one day I’ll be able to afford professional proofreaders and may even have a publishing team behind me. Please understand that still won’t guarantee a perfect book. In the meantime I will do my best to write a good story.

With thanks to Paullina Simons for writing back to me all those years ago, for being so engaging on her Forum when she had the time and for touring Australia and New Zealand as she has done. Sadly I left New Zealand in 2006 and didn’t meet Paullina then but my sister caught up with her in Australia that year (see pic below). It was wonderful to meet her in Brisbane in 2008 and 2012. (Thumbnail pic above.) 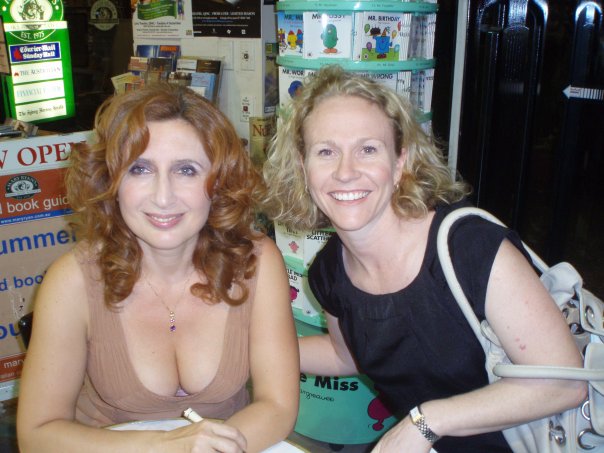 We all need a muse
Scroll to top